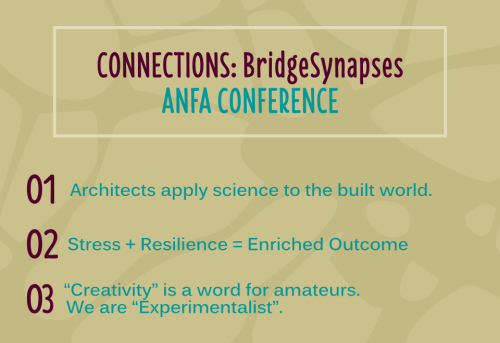 Connections: BridgeSynapses is a conference hosted by the Academy of Neuroscience for Architecture (ANFA). Held at the Salk Institute for Biological Studies, the conference invites renowned speakers to share their research on the human physiological response to the built environment.

BAM principals Pam Cole and Ross Cole were in attendance, and are starting 2017 by sharing innovative findings that will strongly improve the world of design.
1. Architects apply science to the built world.
Fact: Every single brain is unique, imprinted by biology and previous encounters. There is no such thing as a ‘universal brain.’
Proven: Beauty is in the brain of the beholder.1
Proven: Configuration of a space promotes different behaviors.2

Does your space promote the behaviors you want to see?  If yes, understand and preserve it.  If not, understand and change it. But how? Changing peripheral influences may elicit the desired behavior.

Did you know the peripheral aspects of space are shown to have more influence on outcomes than the focal point?  For years, we’ve been taught to put our energies into the spotlight – that key thing that is the focus of our eyes.  Studies by several presenters demonstrated that the peripheral aspects, including the actions going on visually at the perimeter, acoustics, and materials heavily influence our perception of space.  This phenomenon is not just limited to rooms.  Facial recognition is another area where periphery is a major component of understanding.  Eric Kandel, the 2000 Nobel Prize winner, demonstrated this at the conference.  Without creating a spoiler alert, contact Ross Cole and he’ll show you what he demonstrated.  It’s pretty fascinating.

Fact: Americans spend 87% of their time indoors.
Proven:  The built environment can either accelerate or inhibit resiliency. 3

Several presenters were investigating stress, outlined as a physical, chemical or emotional factor that causes tension and may contribute to illness. What can environments do to reduce stress, and how do they increase stress? Isovist Theory4 is an observation that bigger, more open spaces actually contribute to increased stress levels, such as New York’s Times Square, Washington DC’s Western Plaza, or LA’s Pershing Square. Conversely, smaller, more crisply defined spaces (New York’s Paley Park, Washington DC’s Eastern Market or LA’s Grand Central Market) reduce stress and increase resilience, or the ability to recover from illness, depression or adversity. The same is found in interior spaces, particularly the ability to have a clear visual understanding of a space.  Research points to the user’s ability to have some control to influence their environment as a key factor for well-being.

For BAM, we’ve seen clear benefits first hand.  For example, we designed one of the first Hybrid Operating Rooms (HOR) in the US specifically designed with user controls. The patient controls environmental factors in the room such as lighting color. Asserting control of their room produced calmer, less anxious patients for which medical staff reported lower use of anesthesia. Business wise, this has a direct bottom line impact. Lower anesthesia usage reduces risks and shortens patient recovery time.

3. “Creativity” is a word for amateurs.  We are”Experimentalist”.5

We solve problems.  Architects build bridges across the chasm between the subconscious brain and reality.  Creative people have greater capacity to control the natural aggression of the subconscious toward a critical analysis of beauty.  Known as Neuroaesthetics, this skill can be developed to better connect creativity to practical applications and experimentation.

The concept of being “experimentalist” may be more easily understood as working versus playing. Looking at some of the most successful people in the world of art, science and business, there is one thing that stands out: When people are really inspired by what they are doing, it’s almost impossible to tell the difference between when they are working or playing. This was the case between the architect Louis Kahn and the scientist Jonas Salk. While they spoke different professional languages, the one word observed they had in common was play. May you be one of those people where the world can’t tell if you are at work or at play.

Eager to see conference videos and learn more about the speakers? Visit the ANFA site here!